Game designer Yehuda Berlinger developed The Menorah Game as a prototype in 2005, then self-published it in Israel.

Jackson Pope of Reiver Games changed the theme to monster building and published the game as It’s Alive!, coming out with a limited edition in 2007, followed by a second edition in 2008, now out of print.

An IOS version by Jeremiah Maher went on the market in 2011, and an Android version came out in 2013.

In 2019, Invedars of Barcelona reimplemented It’s Alive! as Frankenstein, with new artwork, an additional Angry Villager value card, and a different Loot Value added to the cards. It’s Alive! is ranked 1,326 out of over 100,000 games on the respected Board Game Geek website.

Candle Quest’s gameplay is the same, with minor adjustments. The monster body parts have been changed to friendly candles, the angry villagers are now an unlit candle, and the wild card coffin is a dancing candle.

Candle Quest was published by Victory Point Games in 2013. That edition included a variant for ages 5 and up, and added the Sell Value to the cards. A similar edition is now available on The Game Crafter.

Yehuda’s writings include dozens of well-respected game variants and strategy articles and hundreds of widely-cited articles on gamification, game ethics, industry, philosophy, technology, and humor. Yehuda was one of The Dice Tower’s five nominees for Best New Designer of 2007. Designer

Yehuda Berlinger founded and wrote for two top board game sites: the Purple Pawn game industry website, which grew to 80,000 monthly readers under his stewardship, and his own site Yehuda, which was recommended by the Wall Street Journal’s Blog Watch column. 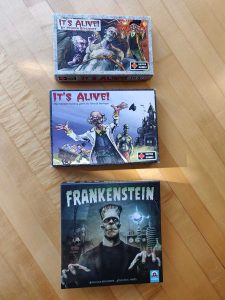